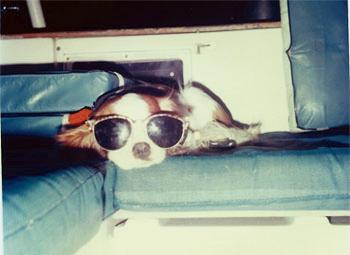 What saved us was Denise vehemently stating “You take my dog-you take me too.” The thing is, they could have. It’s all in timing, perspective and luck.

Pay attention to diet and environment. Have ample supplies of your pets preferred meals. Foods, like chicken or pineapple on a stick in Thailand are pet temptations but can carry unwanted consequences. Malaysian ticks were nearly invisible until they ‘hatched’ in the cockpit causing untold misery for our small dog.

Where your dog evacuates is another consideration. One twenty four footer with a massive 120 pound plus dog aboard had built a small wooden extension over the transom and taught the dog to straddle it like an eastern toilet to do his/her duty. While a credit to training, confining a large dog to space available in 24 feet seemed brutally unfair. Our puppy Brandy (in clip) came aboard at a young age. We devoted a small shallow portion of the bilge as her ‘watering hole.” We knew from feeding times, which were generally regular, approximately what hour to lift the floorboard making the ‘toilet’ available. Brandy was trained to wait that occasion, make her mark, and we would dispose of the waste or paper she soiled.

I can’t speak for cat lovers but we have seen a few live boards, none of which were long distance cruisers. That doesn’t mean it won’t work. We have cruised with several yachts having birds aboard, both small caged varieties and larger squawkers with limited salty vocabularies.

If pets are important I would consider the general rule is, to be prepared.

Pets, like at home, can bring enormous enjoyment, joy and comfort while cruising. They can be an endless source of amusement. Brady, for instance, was trained to stay below, in the cockpit or under the dodger until she heard the anchor chain clattering out. She was then free to roam the deck and stand guard. (another good reason for dogs) Going to shore in the Avon she would stand on the bow balancing sea legs until she felt close enough to shore when she would literally dive off and swim in hoping to catch small crabs scurrying to escape.