Among my memorabilia are these pictures with this post. Try to imagine what it must have been like to handle the rough lines or huge amounts of canvas in that era with only might and men- no conveniences. On the picture looking aft note the paid hand at the wheel while owner in a proper ‘P-coat' of the day stands to weather. I’m told there was a piano below deck. And BTW (as we say today) my Dad claimed these exceptional pictures were taken with a simple box camera.

Of might and men on several occasions including the 1905 Transatlantic Race for a cup sponsored by the Kaiser of Germany. Yachting in the ‘golden era’ was strictly a gentleman's sport - Corinthian style, meaning no professionals aside from paid hands serving as deck apes. Big brawny men with Popeye muscles were needed because there were no hydraulics, winches or turnbuckles.

Yachts like this beautiful schooner were incredibly powerful, easily capable of making 14-16 knots in winds barely raising white caps. Riding the bow spirit in heavy winds would take one hell of a constitution. I never asked mob Dad if they carried a medic. They should have. 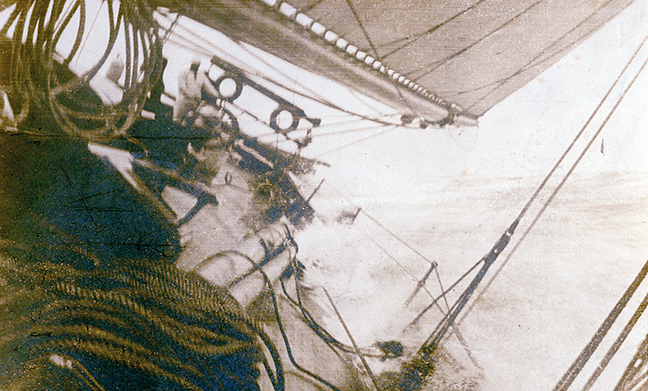 I never met my Granddad. He passed at an early age from pneumonia but left a lot of legacy for my Dad to pass to me. I thought of both of them often on my many passages, fondly and with awe about what yachting must have been like in the “Golden Age of Sail.”