Krakatoa- We are among few who have been there 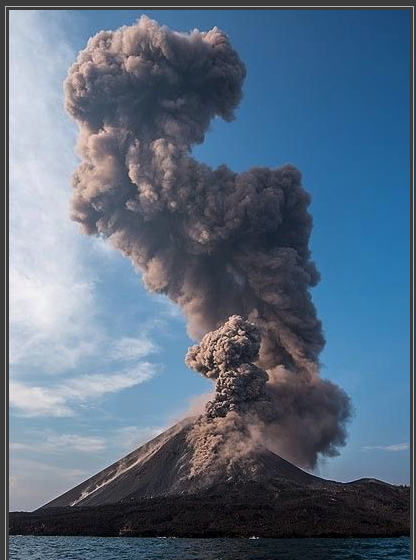 The mighty volcano Krakatoa has been much in the news the last several months.

Last erupting in 1883 it was the second largest in recorded history. In 2019 it's happening again in this remote area of the Sunda Straits, Indonesia, formally called Dutch West Indies.

This is not an easy area to access. I am one of few alive today ever to sail in Karakatoa’s shadow since the 1883 eruption.

Following is a portion of my experience from Chapter 44 of my second book No Return Ticket- Leg Two- Australia to Thailand.

"Our wind crossing the Sunda Strait was 25 knots and a broad reach.With the remains of mighty Krakatoa looming before us that wind died.

“And....didn’t that research say not to go here?"asked Denise, momentarily lowering her Stephen King novel to question the Captain's wisdom.

“Indeed it does,”said Roo, the exact Admiralty quote reads: “Owing to volcanic eruption, the area between Palau(island) and Rakata Palau Sabesi 10 miles north, must be considered unsafe and routes outside these islands should always betaken.”

“So, there ya go. And we’re where...right in the middle?” Denise questioned.

‘Yup, pretty close, but we agreed to sail here. I bet  none of us has ever known, heard about or read about anyone who has made this voyage.

We motored into the shadows of Krakatoa. The day became sunny, peaceful and mysteriously quiet.103 years ago, almost to the day, 36,000 innocent people were blown from the earth during a powerful volcanic eruption that created a tsunami 100 feet  high. Smoke and ash rocketed at 80 miles an hour, twenty miles toward Heaven, circled  the globe for months. Ashes rained on Paris 7000 miles away. The explosion was said to be  felt in Australia. A ship off the coast of Java with 128 aboard was driven a mile inland. All perished.

Roo, at Endymion’s helm, added, “I read the dust cloud was so big the sun over South America was blue.”

I felt humble.The silence was eire. Soon we were in the epicenter, where loved ones holding hands, laughing children playing and pets enjoying a Sunday afternoon died an unimaginably agonizing, hopefully sudden death. Entire small communities vanished in seconds.

An odd feeling of belonging swept over me.Had I known of this place before, perhaps from a previous life? I felt reverence and profound  sadness I could not explain as Endymion motored slowly alongside jagged rocky sheer rock cliffs jutting hundreds of feet straight up from the sea.Tangled vines, some with flowers grown in the last century clung precipitously to the rugged terrain. Our depth indicator could not sound the bottom, indicating more than 500 foot depth, yet we were a scant 100 feet from the silent remains.

Before  us Anak (The Son of) Krakatoa was rising.There was no foliage on this barren, bleak, yet intriguing lava island.

Roo agreed. Me too.

Denise said “You are nuts.”